The Por and Para Wheel up close: PDF version

A more Detailed look at Por and Para

drlemon.com by Deborah R. Lemon is licensed under a Creative Commons Attribution-NonCommercial-NoDerivs 3.0 Unported License
Based on a work at www.drlemon.com

Both por and para can both be translated often as the English preposition "For".

In fact, originally Por and Para came from the same Latin word "pro". Pro later split into por and por a which eventually became por and para respectively.

Por and Para evolved in different directions and each has a wide range of meaning that contrasts with the other.

For example, if you want to order a bottle of wine for your friend at a restaurant, you must be sure to say, Quiero una botella de vino para mi amiga. Why?

Because if you say, Quiero una botella de vino por mi amiga, you have just offered your friend to the waiter in exchange for a bottle of wine! So you can see that it is important to grasp the different uses of Por and Para!

The main difference is that:

Por refers to movement: through time or space

For those of you in my classes, you are familiar with the (preposition) Directional "A".

We can have a verb of movement Ir: Voy (I'm going)

and then add Directional "A" to indicate Destination: Voy a (I'm going to...)

Para is Por with a Directional A.

Here is a visual chart of the differences. Para marks a destination at the edge of the wheel. Por marks the movement between the point of origin and the Para destination. 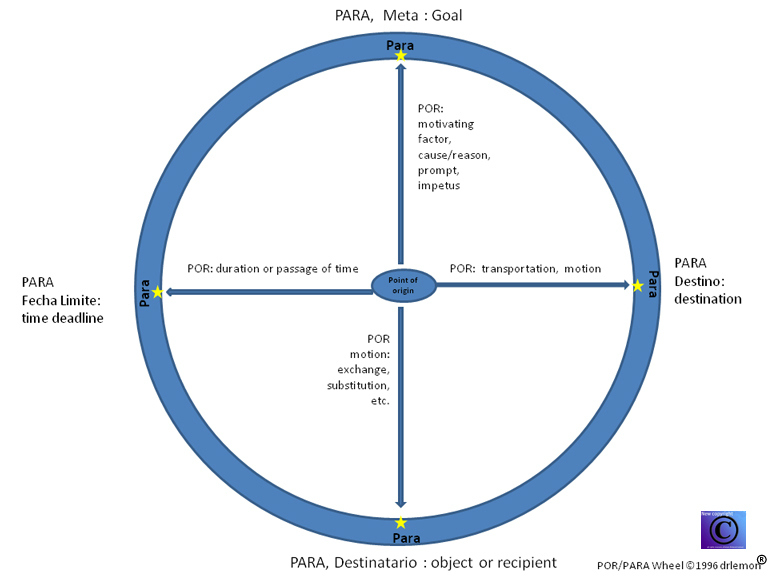